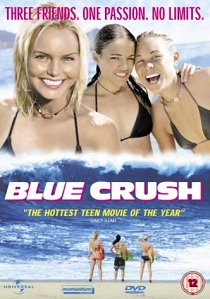 In a sport dominated by men, Anne Marie is a young and promising female who can give any male surfer a run for their money. She lives for surfing and when she's not working as a maid at the local tourist hotel or looking after her younger sister, every moment of her free time is spent surfing the big waves as she prepares for the toughest surfing competition on Oahu's infamous Bonzai Pipeline. But in order to stand any chance of winning she needs to conqueror her fear of drowning, and after a dangerous wipe-out in which she nearly drowned her fears are rightly justified. It's rough out there and the sea takes no prisoners!

However, when a NFL football team arrives at the hotel Anne is bowled over by the handsome pro quarterback Matt Tolman and much flirting ensues. Things soon heat up between Matt and Anne when Matt and some of the other players approach the girls for surfing lessons. Although they are reluctant at first, the chance of earning some easy money soon has them paddling out to sea with the eager learns. Unfortunately, all of these diversions causes Anne's preparations to go seriously off the rails and when romance finally blossoms Anne's friends soon become annoyed with her lack of commitment to the competition.

The picture is bright and colourful with a high level of detail and bit-rate throughout. Although the picture can be a little grainy at times, especially during the dusk/dawn scenes, the picture is generally sharp with no problems with artifacting or outlining. With this being a recent film the condition of the transfer is good and there are no signs of dust scratches or other picture imperfections. However, during the surfing scenes the picture really comes into life and it really highlights the true beauty and power of the ocean. I never knew that there could be so many different colours in the sea.

One minute the ocean is a crystal clear blue, then turquoise and finally a foaming white as a wave breaks and crashes to shore. And, unlike the UK, there's not even a discarded drink can (or worse) bobbling around in the waves. With this mass of data and activity on the screen all at the same time there's not a hint of pixelisation or other encoding problems. The cinematography is truly remarkable with camera work so good that you'll think you're watching a documentary programme on the Discovery channel. It's enough to make you want to find the nearest surfboard and head for the sea. It's just a pity I don't know the first thing about surfing, let alone live anywhere near the sea.

But things are going to get much better as the icing, and the cherry, on the cake to this surfing extravaganza is the sound. Whilst the group is on dry land the dialogue is crisp and clear in the centre channel, but there is precious little to challenge even the most expensive of surround systems. However, head out to sea with those massive Hawaiian waves and you'll be quickly looking for your water wings as the film takes on a totally different dimension.

Once the surfing starts the surround channels kick in with massive amounts of crashing waves and spine chilling roars of the power of the sea. Even when the action heads underwater, and the inevitable meetings with the coral beneath, the crunching sounds of bones against rock will have you wincing in pain. And if that wasn't realistic enough for you, whenever you catch a wave the subwoofer bursts into the life and the furniture rattles like a house caught in an earthquake. Put all this together with the superb cinematography and you'll soon know what it feels and looks like to surf the waves without getting wet. Superb!

The disc is also complimented by a decent set of extras with a wealth of information on both the film and surfing in general. Fortunately, director John Stockwell has been a surfer for years and his enthusiastic audio commentary is full of interesting facts about the sport and his knowledge was certainly put to good effect during filming. His commentary track is certainly a contrast to the babbling, and quickly boring, audio commentaries offered by the cast members.

The disc is also packed with more featurettes than you can shake a surfboard act. Unfortunately, some are more interesting that others whilst they all suffer from being far too short. The most interesting is the Filming Blue Crush featurette. However, it is also the most annoying as it is far too short and explains little about the filming techniques used. The Making of Blue Crush featurette is just as disappointing as it ends up being the usual self promotional rubbish. The Wipeout! featurette is good for a laugh whilst the other featurettes offer little entertainment value. There's also a number of uninteresting deleted scenes and you can certainly appreciate why they were cut from the film.

Blue Crush contains some amazing surfing cinematography which puts you on top, in the middle and under the massive Hawaiian waves. I missed the film at the cinema, but I'm sure it must have been awesome to see and hear on the big screen. If you consider that Kate Bosworth had never surfed before you'll see just how brave they were to venture out into those waves and full respect is due to the cast.

There's no doubt that this film is aimed at a teenage audience, and a female one at that. Whilst the girls can cheer at their independence and equality in a sport dominated by men, the male viewer can cheer equally loudly at the gratuitous use of the bikini and bronzed bodies. Hurrah!

If you put the eye candy for either sex aside, Blue Crush still manages to cast a spell which draws you right in. And that's the bizarre thing about the film - the plot is so thin it really shouldn't work. But is really does. Even the ending is completely unexpected and makes a refreshing change from the usual Hollywood pap. Ok. So it won't win any awards for the acting, but perhaps it's the power, the thrill, the danger and the awesome power of the sea, but something in Blue Crush makes it work.