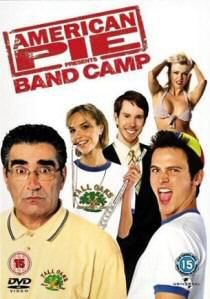 It's graduation time at East Great Falls High and there's a new set of students approaching their big day. With the gang of old now moved onto pastures new, it's left to students such as Matt Stifler to carry on the family tradition and be the centre of the school's attention. In usual Stifler style, on the eve of their graduation, and to make sure the graduation evening goes with a swing, Stifler Junior and his cohorts decide to spice up the evening's entertainment by pepper-spraying the school band's equipment prior to them playing. In the aftermath of the musical mayhem that ensues, managing to disrupt the entire graduation ceremony, Matt finds himself in as much trouble as he created when he's called into the head's office, only to come face-to-face with a new improved, adult Shermanator.

Deciding to teach Matt the error of his ways, The Shermanator decides to send Stifler on a summer vacation with a difference - Band Camp. There he'll be forced to do general chores and clean the instruments as a punishment befitting the crime. But as with the Shermanator's progression into teaching, Steve Stifler's adult life has seen him build a not too unexpected career in the production of adult entertainment films. With his elder brother's success banging away in the back of his mind, and determined to lose his 'Stifler's younger brother' tag, Matt decides that anything his brother can do, he can do better. But with no way of escaping, and naturally, not being too happy with the idea of being sent to geeky band camp for the summer, it's not too long before he hatches a plan to secretly film the sordid life of sex, drugs and rock 'n roll that hides behind the wholesome, all-American image of band camp. Who say's he can't beat Steve at his own game?

After enlisting the help of his shy, geeky, virgin roommate Ernie, Matt tries to befriend the sweet-but-sexy Elyse, the band's attractive, yet ultra-serious drum major. In typical American Pie, style, Matt crashes and burns through a series of embarrassing escapades, whilst all the time trying to capture the desired footage, and win over the affections of the ever more beautiful Elyse. Naturally, use to the antics of his now happily married son Jim, the level headed Mr. Levenstein is always on hand to help with Matt's ever more frequent visits to First Aid.

When you least expect it you are presented with a transfer which is quite remarkable. Colours are rich and vibrant and there's a good level of detail with few signs of artifacting or outlining. Even the black levels are reasonable enough, although there were a few instances where the contrast was a little too high. And given that this is a direct-to-video release, there's been very little chance of any damage occurring to the print, and as such it's very clean with no signs of dust specks or other forms of print damage.

With a unexpectedly good picture transfer comes an equally unexpected set of 384 Kbps Dolby Digital and 768 Kbps DTS soundtracks. Whilst there's not really anything to test either soundtrack, with the teenager friendly musical score playing a prominent role throughout, the dialogue is crisp and clear in the centre channel whilst there's the occasional activity in the surround channel. LFE effects are none existent, but then again there's not much call for them in a film such as this. It's just a pity that Universal have decided to add a DTS soundtrack to a film such as this when other films in their catalogue, such as The Chronicles or Riddick, are crying out for such treatment. Is it a simple case filler material? Let's hope not and that future releases will be equally graced with DTS sound.

Once you get past the ever present anti-piracy warnings, the main menu and sub-menus are static and silent affairs and if you dwell on a menu too long, which is hardly likely to happen really, then it will timeout and the film will eventually start. Quite why Universal have decided that we're not capable of determining when we want to start watching the film is beyond me, but I guess it's better than having a television suffering from American Pie screen burn. Extras wise, there's a fair collection on offer with some behind-the-scenes footage which, although fairly immature in its collection, does at least offer some insight into the filming process.

The four minutes worth of Outtakes are the usual collection of unfunny scenes of forgotten lines and four letter words. The twelve minutes worth of Deleted Scenes are hardly exciting, but with no explanation as to why they were cut you're left to your own devices to come up with your own ideas, but with a film low on laughs already it can only have been for timing purposes.The cut scenes range from a few seconds to a few minutes in length and the cutting room floor contains far too many scenes with the criminally unused Eugene Levy. If there was anyone who could save this film then Jim's Dad would be at the head of the queue. However, some of his finest moments only find there way to the cutting room floor.

The seventeen minute Band Camp Dirty Diary featurette has Tad Hilgenbrinck, Arielle Kebbel and Jun Hee with a camcorder creating a daily on-set diary. They all wander around the set talking about various pointless things as they go and they even show you some of the filming. You get to look in their trailers and they even bump into each other and end up filming each other. There's also interviews with other cast members who are asked to explain some of Stifler's more offbeat sayings - some with more success than others. It's not the most exciting of features, but it's probably funnier than the actual film. Next up is the five minute Band Camp's Dirty Secrets featurette hosted by the feisty Rachel Veltry and Angela Little. When they're not holding hands, they offer a quick tour of the set and show you what it is like to shoot on location. If you can drag your eyes away from the two on screen lovelies, it's actually quite a good featurette with the occasional bit of detail on the sets and the costumes which was missed in the first featurette.

Next up is the fifteen minutes worth of Secret Rovercam Footage. After an overly long introduction, the Rovercam follows, or chases, various minor characters around the band camp as they argue with each other or just generally ramble about rather pointless things. As the scenes have obviously been filmed specifically for the DVD none of the major characters are on hand. Mind you, even if they were it would still all be rather pointless. Things are rounded off with one and a half minute Baby Got Back Music Video. If you're a teenager with too many hormones, or let's face it, a male with blood still flowing through your veins, then you'll love this video as various scantily clad ladies in bikinis shake their booty at the camera. I'm not sure of the purpose of the video, but frankly, who cares!

To say that American Pie : Band Camp is a shameless attempt to cash in on a classic comedy formula is a bit of an understatement. Be warned, this is no American Pie and, judging by it's direct to video route, there'll hopefully be no further ventures into this territory again. The marketing executives may have thought it was a good idea at the time, but the simple fact that it never appeared in the cinema makes me wonder whether someone ended up wearing the dunces cap and driving the company milk float for a month. It may have seemed like a good idea at the time, but rest assured, it wasn't and it's always better to walk away from a winning formula than completely wrecking it with a cash in.

Although my teenage years are a dim and distance past (oh, if only I could be a teenager again!) I do enjoy these sort of teenage comedies - I even enjoyed the original American Pie films and I was still far from being the target audience way back then. But I can spot a stinker when I see one and, believe me when I say, American Pie : Band Camp stinks more than an overripe piece of Stinking Bishop cheese. The films only saving grace, if you can even call it that, is that Tad Hilgenbrinck's portrayal of Steve Stifler is top notch and I actually had to do a few double takes to make sure it wasn't actually Sean Scott or his real life brother.

I'm sure a few hormone filled teenage boys will find this film of some interest, but for the rest of us who've grown up with the likes of the true American Pie franchise and Road Trip, it should be given a very wide berth indeed. Sure, the extras do some add value to the disc, plus they are actually better than the entire film, but it still fails to save a sinking ship. Be prepared to see this title in you local Woolworth's bargain bucket very soon, and even then you should still probably avoid.