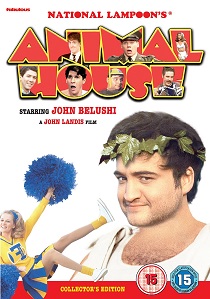 It's the start of a new year at Faber College and the freshmen are pledging their allegiances to one of the many college fraternities. Naturally, most students want to join the best one on campus and at Faber College the one to be in is the Omega house. The Omega fraternity contains the cream of the students and your appearance and parents wealth and influence are the main factors in getting through the door. If you're ugly and a geek then you can pretty much forget pledging there.

But at the other end of the scale things couldn't be anymore different. The Delta house is an absolute tip and contains most of the campus losers, womanisers and all round slobs. Members survive on copious amount of beer and spirits and their parties are legendary. This fraternity is so much more fun that the prudish and stuck up Omega house and as a result the two houses, and the long suffering Dean, don't get along at all. But who cares when you can party all night and make the lives of the Omega house a complete misery.

Trouble is, Delta's academic record is so poor that half of the house should be returned to kindergarten. With Delta house already on probation for their many outlandish endeavours, Dean Wormer is looking for any excuse to close them down and expel the students. That excuse finally arrives when Delta house organises one of their famous toga parties and results in one of the students sleeping with the extremely drunk wife of the Dean whilst another gets the daughter of the Mayor so drunk he has to take her home in a shopping trolley. With Delta house closed down there's nothing left but to get revenge on Dean Wormer and his collaborators in Omega house. And with the end of year parade approaching, there are plans to be hatched and floats to be built.

For a film originating from the late 1970's the picture is not going to be anything remarkable. The picture suffers from a lack of real colour depth whilst contrast levels can be a little on the high side. The remastered picture has certainly made a difference, but the digital noise reduction process can only make so much of a difference to a damaged or worn print. As a result of the digital trickery the picture is relatively free from dust scratches and has an average bit-rate throughout. But the digital manipulation is not flawless and the picture can be grainy and exhibit artifacting problems, especially with fast moving or colour rich scenes. It's definitely showing its age.

The original soundtrack was in humble mono so along with the picture tidying up exercise the sound has been remastered into Dolby 5.1. Mind you, not that you'll notice too much of a difference between the two as with it being a dialogue intensive film there is little need for an explosive and involving soundtrack. The majority of the audio takes place in the centre channel whist there is the occasional use of the front stereo channels with some reasonable separation and steerage. There is little or no activity in the LFE channel whilst the effects channels are only ever used by the musical score. A bit of a disappointment, but it wasn't all that unexpected for a film of this age and genre.

The menu is nicely scored and animated with cut scenes from the film flying around the screen whilst the extras are sure to offer something of interest to true fans of the film. The twenty minute long featurette Where Are They Now? catches up with the various characters from the film and finds out just where their life has taken them. However, the nice thing about this feature is that the original cast pick up their characters and it takes you a little while to realise that it is a spoof feature.

Highlight of the extras must be the Did You Know That? animated anecdote trivia track. Once you've enabled this feature and started watching the film, bits of behind-the-scenes information and trivia will pop up on screen at regular intervals. This is certainly an extra which true fans will relish, but to avoid distractions and an information overload you should consider a second viewing with the trivia track enabled. The Year Book featurette is a more serious behind-the-scenes look at the film with most of the cast and crew giving their insights on the films production. As with the anecdote track, the information is interesting and informative as well as containing a few funny stories from the cast. Things are then rounded off with original theatrical trailer.

Fans of Animal House are sure to rejoice about this special edition DVD release. After all, numerous versions have been available on region one for sometime and UK fans were getting a little annoyed with the delay in releasing the region two edition. Fortunately, it's not a bare bones release and Universal deserve a pat on the back for producing this disc. Ok, so it's a rehash of the region one Double Secret Probation version, but with a remastered soundtrack, tidied up visuals and a good selection of extras, region two fans will be glad they waited.

If it wasn't for Animal House then the college comedies such as Porky's, American Pie, Road Trip and Old School would have never existed and it is certainly something we should be thankful of. However, has this ground breaking comedy stood the test of time? Well, I would have to say no and that new viewers may find little to laugh about. This may well produce howls of disapproval from true fans of the film, but having never seen Animal House myself and hearing the many positive comments about the film I was left feeling extremely disappointed. Sure, there are funny moments, such as the death of the horse in the Dean's office and Blutarsky's impression of a zit, but they are in the minority. One for the fans then.