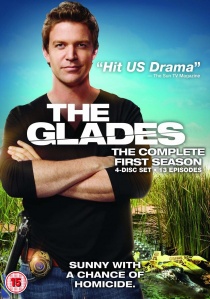 Matt Passmore (Underbelly, The Cut) is Jim Longworth, an attractive but rebellious homicidal detective who is made to move from his Chicago police department to a sleepy town in Palm Glades when his captain wrongfully accuses him of sleeping with his wife.

The Florida Everglades seem to promise Jim a quiet life playing golf and basking in the sunshine. But Jim soon learns this town is far from tranquil as the mysterious murders keep piling up. Each case pulls Longworth grudgingly off the golf course and into the midst of what he does best as one of the top homicidal detectives.

The unconventional detective spends his days arguing with his boss Colleen (Michelle Hurd: 90210, The Good Wife) and trading gags with his buddy the medical examiner Carlos Sanchez (Carlos Gómez:Burn Notice).

Golf and gory remnants are Jim's expertise but when he's not solving murders he has an entirely different case on his hands, securing a date with the gorgeous and quick-witted medical student Callie (Kiele Sanchez: TV's Samantha Who? and Lost).

This sizzler from the sunshine state has been a smash hit in the US, recently renewed for its fourth season. Get hooked from the very beginning when Season 1 comes to DVD packed with extras, including deleted scenes, behind the scenes footage, commentaries and insightful featurettes.