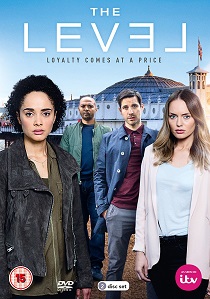 A squeaky clean detective's dark past comes back to haunt her in a brilliantly tense new home-grown thriller The Level. Set in Brighton this riveting series makes its way to ITV and is set for its home entertainment release courtesy of RLJ Entertainment's Acorn label this November.

Detective Sergeant Nancy Devlin (Karla Crome) has a secret double life. Her exemplary police career masks a covert attachment to shady businessman and drugs trafficker, Frank Le Saux (Philip Glenister), who she is inextricably linked to from childhood, as the father of her best friend, Hayley (Laura Haddock), and the father figure she herself craved.

Nancy has been playing a dangerous game to ensure that Frank always remains off the police radar, but she soon finds herself at the centre of an investigation which puts her at risk of exposure and sees her stalked by a killer intent on destroying her. Nancy's complicated love life and relationships with colleagues creates further tension as she doesn't know who she can trust... literally with her life.

The Level is unmissable British drama at its most enthralling.