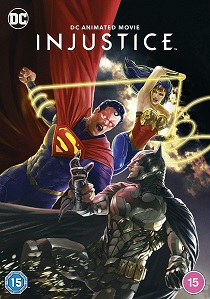 Unhinged, Superman decides to take control of the Earth for humanity's own good. Determined to stop him, Batman creates a team of like-minded, freedom-fighting heroes. But when Super Heroes go to war, can the world survive?

Injustice is released on DVD and Blu-ray 18th October 2021 from Warner Home Video.