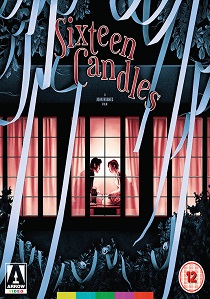 NewsComedyRomanceArrow
News Article Go back to homepage
With a new restoration by Arrow Films from a 4K scan of the original negative, a girl's "sweet" sixteenth birthday becomes anything but special, as she suffers from every embarrassment possible as John Hughes' Sixteen Candles is released on Blu-ray 22nd July 2019.
Molly Ringwald, Michael Schoeffling, Anthony Michael Hall, Paul Dooley, Gedde Watanabe, Justin Henry
John Hughes
Hilton A. Green
Arrow Video
1 hour 34 minutes
22/07/2019
#SixteenCandles
Thank you for supporting DVD365.net when you order using the link(s) below. As an Amazon Associate we earn from qualifying purchases
Buy BD
Information

In his debut film as writer-director, John Hughes immediately cemented himself as the king of teen cinema with Sixteen Candles, and in the process also introduced one of the most iconic faces of '80s Americana: Molly Ringwald.

For high schooler Samantha Baker (Molly Ringwald), her 16th birthday might be the worst day of her life. Her entire family has forgotten about it due to her older sister's impending wedding; her biggest crush, high school hunk Jake Ryan (Michael Schoeffling) has discovered an embarrassing "sex quiz" filled out by Sam in which she details how she is saving herself for him; and to make matters worse, she is hounded by a relentless nerd (Anthony Michael Hall) who won't take no for an answer. But Sam's sweet sixteen isn't over yet, and before the end of the night, all her birthday wishes could still come true...

Taking the rude and crude humour of the teen sex comedies that came before it and placing it within the intimately portrayed perspective of a girl's mid-teenage-life crisis, Sixteen Candles is a bombshell of 80s pop culture that continues to be debated and beloved over three decades after its release.

With a new restoration by Arrow Films from a 4K scan of the original negative, Sixteen Candles is released on Blu-ray 22nd July 2019.

HotDVDBDUHD
The saga of Michael Myers and Laurie Strode continues in the next thrilling chapter of the Halloween series as Halloween Kills arrives on DVD, Blu-ray and 4K UHD 17th January 2022 from Universal Pictures (UK). END_OF_DOCUMENT_TOKEN_TO_BE_REPLACED
Top PicksView