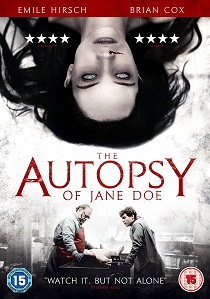 Experienced coroner Tommy Tilden and his grown-up son Austin run a family-owned morgue and crematorium in Virginia. When the local Sheriff brings in an emergency case - an unknown female corpse nicknamed 'Jane Doe', found in the basement of a home where a multiple homicide took place - it seems like just another open-and-shut case. But as the autopsy proceeds, these seasoned professionals are left reeling as each layer of their inspection brings frightening new revelations.

Perfectly preserved on the outside, Jane Doe's insides have been scarred, charred and dismembered - seemingly the victim of a horrific yet mysterious ritualistic torture. As Tommy and Austin begin to piece together these gruesome discoveries, an unnatural and terrifying force takes hold of the crematorium. While a violent storm rages above ground, it seems the real horrors lie on the inside...

The Autopsy of Jane Doe is directed by André Øvredal (Trollhunter, Mortal) with the original screenplay written by Richard Naing and Ian Goldberg. The film is produced by Fred Berger (La La land), Eric Garcia (Cassandra French's Finishing School), alongside Ben Pugh and Rory Aitken from UK-based production and management outfit, 42 (The Other Side Of The Door, Welcome to the Punch, Shifty).

HotUHD
After moving to a new town, two brothers discover that the area is a haven for vampires as the classic The Lost Boys is released on 4K UHD 20th September 2022 from Warner Home Video. END_OF_DOCUMENT_TOKEN_TO_BE_REPLACED
Top PicksView