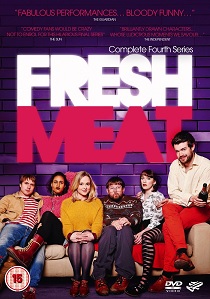 Starring Jack Whitehall, Joe Thomas, Greg McHugh, Kimberley Nixon, Zawe Ashton and Charlotte Ritchie, Fresh Meat, the comedy drama series from the creators of Peep Show about the hilarious, and often painful, truths of being a student, returns for a fourth and final series on DVD on 4th April 2016, courtesy of Channel 4 DVD.

Series 4 sees the 'finals countdown' on and the end of university life drawing ever closer. JP worries about his future following a visit from his brother, Vod (Zawe Ashton) is fixed in the present as she grapples with debt. Oregon (Charlotte Ritchie) is Student Union President and busy planning her legacy, whilst Kinglsey (Joe Thomas) finds himself in an unconventional relationship.

Josie is still languishing in second year and facing up to the prospect of a final twelve months in Manchester without her delightfully odd housemates. Howard (Greg McHugh), who had been on course for a first class degree, gets some unexpected news which sends him spiralling.