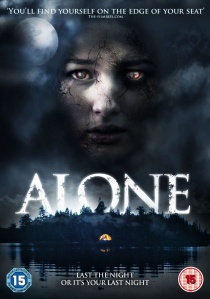 Last the night or it's your last night. Starring Annie Clark, the horror Alone is released on DVD by Kaleidoscope Home Entertainment on 28th April 2014.

As the moon rises, the silence descends as 17-year-old Gillian (Annie Clark) settles down for a long night alone. Having taken a job as a counsellor at a remote summer camp, Gillian must spend two nights by herself on the camp's wild, deserted and supposedly haunted island as part of her initiation.

When Gillian's 'solo' is interrupted by a local man responding to a terrified distress call, the expedition rapidly devolves into the stuff of nightmares. Eerie echoes and formless shapes stalk the landscape as the island takes on a life of its own. As a dark and horrifying secret is uprooted, Gillian quickly realises that to be initiated, first she must survive...