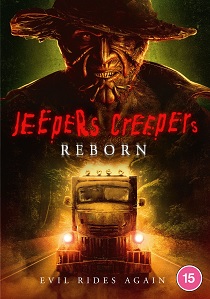 NewsHorrorThriller
News Article Go back to homepage
Get your creep on as Jeepers Creepers: Reborn - the brand-new horror reboot of one of the most iconic horror franchises of the century - is set to strike fear into a new generation as it arrives on Blu-ray and DVD 10th October 2022 from 101 Films.
Sydney Craven, Imran Adams, Jarreau Benjamin, Peter Brooke, Georgia Goodman, Ocean Navarro
Timo Vurensola
Terry Bird, Michael Ohoven
101 Films
1 hour 28 minutes
10/10/2022
#JeepersCreepersReborn
Thank you for supporting DVD365.net when you order using the link(s) below. As an Amazon Associate we earn from qualifying purchases
Buy DVD
Buy BD
Information

Get your creep on as Jeepers Creepers: Reborn - the brand-new horror reboot of one of the most iconic horror franchises of the century - is set to strike fear into a new generation. Following its theatrical release this wickedly demonic gorefest from Timo Vuorensola (Iron Sky) gets its digital, Blu-ray and DVD release on 10th October 2022 from 101 Films.

The Horror Hound festival is a big deal, and now, it's coming to Louisiana for the very first time - the excitement is immense. The geeks, freaks and die-hard horror fans are coming from far and wide to experience the fear and the fun.

Chase (Imran Adams - Hollyoaks, Ghosts), a lovable geek, is one such fan. He can't wait to go and has bagged tickets for him and his devoted girlfriend Laine (Sydney Craven - EastEnders, A Christmas Carol), who has even more exciting news she's waiting to share...

But as the festival approaches, Laine experiences disturbing premonitions involving the town's terrifying past ... and can't shake the feeling that something evil is coming.

As the festival kicks off and blood-soaked entertainment builds to a frenzy, are Laine and Chase ready to face the legend of the Creeper, in a brand-new horror attraction? Or could Laine's fears be about to come true - is one of the most wicked demons ever set to wreak havoc, death and devastation on the unsuspecting crowds?

The pair must prepare to fight for their lives as they realise their worst nightmare has come true as Jeepers Creepers is Reborn.

BD
A stellar cast sizzles in Heat, a taut psychological drama about an obsessive detective and a brilliant thief whose fates are linked in the aftermath of a high-stakes securities heist, released on 4K UHD 8th August 2022 from ... END_OF_DOCUMENT_TOKEN_TO_BE_REPLACED
Top PicksView