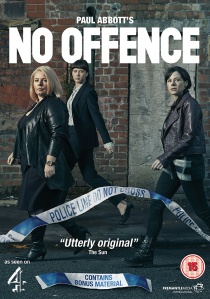 No Offence, the outrageously rude, critically acclaimed cop comedy drama from award-winning writer and Shameless-creator, Paul Abbot, will be released on DVD on 10th August 2015 from FremantleMedia International.

The show, which aired on Channel 4 on Tuesday nights at 9pm, attracted great viewing numbers with its raucous, riotous and razor sharp, new and completely original take on the world of the police procedural. Channel 4 has also just announced that the hit show will return for a second series which will start shooting at the beginning of 2016.

The addictive jet black comedy brings Abbott's larger than life quick-witted characters to the forefront as they find unconventional ways to crack crimes in Manchester. Joanna Scanlan (The Thick of It, Getting On), Alexandra Roach (The Iron Lady, Utopia) and Elaine Cassidy (The Paradise, Harper's Island) head up the dynamic squad who together with Colin Salmon (Arrow, 24: Live Another Day), Will Mellor (Dates, Broadchurch) and Paul Ritter (The Game, Friday Night Dinner) are the tough but big-hearted bobbies who go above and beyond to bring down the criminal world.

The DVD also boasts exciting extras including three exclusive video featurettes: An Interview with Paul Abbott; Acting With Down's Syndrome; and Meet The Cast. Plus there's an extended interview with the show's star, Joanna Scanlan and deleted scenes.

No Offence, an eight-part series from Paul Abbott (Shameless, Hit & Miss, State of Play), is a police procedural with a difference. Set in a crumbling cop shop on the wrong side of Manchester, No Offence follows a group of police on the front line, wondering what they did to end up here, in this force, on this side of town.

Keeping these streets clean is a Herculean task, enough to demoralise even the keenest rookie - but there's a reason why this hotchpotch of committed cops are on this force, on this side of town. Drug labs, arsonists, neo-Nazis and notorious murderers are all in a day's work for this close-knit team, led by the dizzyingly capable but unquestionably unhinged DI Vivienne Deering. But when a particularly twisted serial killer emerges it leaves even the most hardened of these seasoned coppers reeling.

Flanked by her right-hand women - the compassionate but impulsive DC Dinah Kowalska and the recently promoted DS Joy Freers - Deering and her team must crack this case by whatever unconventional means possible. Because amidst all the assorted low life; the pimps, the petty thieves,and downright nasty bastards they've dealt with, this is their most disturbing case yet, one that will touch their lives in ways they could never expect.

BD
A stellar cast sizzles in Heat, a taut psychological drama about an obsessive detective and a brilliant thief whose fates are linked in the aftermath of a high-stakes securities heist, released on 4K UHD 8th August 2022 from ... END_OF_DOCUMENT_TOKEN_TO_BE_REPLACED
Top PicksView