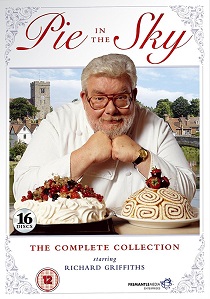 BBC1's long running and fondly remembered detective drama Pie In The Sky comes to DVD on 29th August 2011 as a 16-disc collection featuring every episode from all five series of the show that made the already celebrated theatre star and British character actor Richard Griffiths (Pirates Of The Caribbean: On Stranger Tides; Harry Potter And The Deathly Hallows) a household name.

After 25 years of service, D.I. Henry Crabbe desperately wants to retire from the police force and concentrate on his passion for cooking and his dream of opening his own restaurant. After being shot while on duty during his most recent investigation, he's even more convinced it's the right thing to do.

But when his conduct is called into question after he is framed by a fellow officer on the case, his incompetent boss, Assistant Chief Constable Freddy Fisher, seizes the chance to keep his best officer in the ranks and refuses Henry's retirement request. Instead, he agrees to allow Henry to work on a part-time basis as and when he is needed (which proves to be far more often than anticipated) until the investigation into any wrongdoing is completed. The arrangement leaves Henry and his long-suffering wife Margaret just enough time to spend on establishing the Pie In The Sky restaurant. But how will Henry cope with juggling the running of the place with his detective work?

A light-hearted, character-driven drama about the eventful life of a likeable hero with a taste for good food, fine wine and solving crime, Pie In The Sky is a must-see series for fans of Midsomer Murders, Lewis, Inspector Morse and A Touch Of Frost.

Related Articles
Chewing Gum: The Complete Series, Elizabeth is Missing
Liverpool 1: The Complete Series, One Night In Istanbul: The Movie, Up 'N' Under
A Belfast Story
Pirates of the Caribbean: On Stranger Tides, Harry Potter and the Deathly Hallows: Part 1, Bedtime Stories, Harry Potter and the Order of the Phoenix, The History Boys, Sleepy Hollow
Comments
DVD Releases News Pick