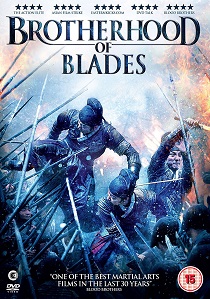 Hailed as 'one of the best martial arts films of the last 30 years' (Blood Brothers), comes the critically acclaimed, action-packed Chinese saga, Brotherhood of Blades, directed by Lu Yang, which flies on to DVD, Blu-ray, on-demand and download on, courtesy of Second Sight.

Complete with outstanding fight scenes and a high body count, Brotherhood of Blades tells an epic tale of power struggles, betrayal and conspiracies during the final years of the Ming Dynasty.

When three elite, sword-wielding assassins are tasked by the Emperor to eliminate a powerful enemy and his loyal followers, they find themselves pulled into in a treacherous conspiracy which can only lead to a bloody battle for the Empire.

DVD
Two lifelong friends find themselves at an impasse when one abruptly ends their relationship, with alarming consequences for both of them in The Banshees Of Inisherin, released on DVD and Blu-ray 30th January 2023 from Walt ... END_OF_DOCUMENT_TOKEN_TO_BE_REPLACED
Top PicksView