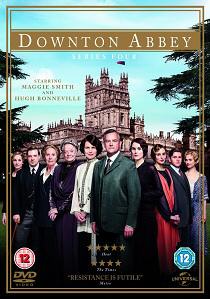 Nominated for a total of 39 primetime Emmy® Awards, Downton Abbey, created and written by Julian Fellowes, begins series 4 in 1922. Following on six months from the tragic death of Matthew in the Christmas episode Mary is left to bring up baby George alone. Will she find happiness in the fourth series of the critically acclaimed drama?

Shirley MacLaine reprises her role as Cora's mother, Martha Levinson in the 2013 Christmas episode and is joined by Paul Giamatti (Sideways) who plays Cora's free-spirited brother, Harold. As well as James Fox (Charlie and the Chocolate Factory) who will play Lord Aysgarth

Re-live your favourite moments with the characters you love when Downton Abbey Series 4 is released on Blu-Ray and DVD from 11th November 2013 from Universal Pictures (UK).

DVD
A fascinating exploration of female friendship, urban class divide, social media, and motherhood, all wrapped up in an edge-of-your-seat thriller, The Secrets She Keeps arrives on DVD 10th August 2020 ... END_OF_DOCUMENT_TOKEN_TO_BE_REPLACED
Hot PicksView