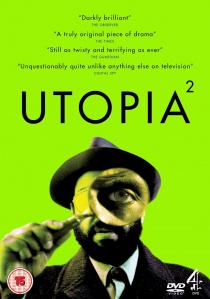 It has been 3 months since the destruction of the Utopia manuscript, and things have been quiet for Ian, Becky and co. Believing the Network to be finished, they each try to get back to some semblance of normality. Ian (Nathan Stewart-Jarrett) is back working in IT, and to add insult to injury, now has Grant as a flatmate. Becky (Alexandra Roach) is alone and with her Deels symptoms rapidly getting worse, she's considering drastic action.

But far from being over, the Network are only just beginning... With Jessica (Fiona O'Shaughnessy) as their prisoner, they finally have Janus and are poised to put their plans into action. Production of the final vaccine is in full swing, and Dugdale (Paul Higgins) finds himself at the helm, as the new head of Corvadt. But with Geoff's (Alistair Petrie) new found public popularity starting to go to his head, his resentment at being the Network's political puppet has started to grow, and he is forced to resort to desperate measures when his career is threatened.

Wilson (Adeel Akhtar) finds himself at the very heart of the Network as Milner's new right hand man - but after his stark betrayal of his friends, just how far is he prepared to go in pursuit of his beliefs? His dedication to the cause is tested to its limits as Milner forces him to prove his loyalty.

Finding their lives in danger again, the gang must join forces once more to fight the all powerful Network. With Arby (Neil Maskell) having seemingly turned over a new leaf, old loyalties have been turned on their heads, and who to trust becomes a matter of life and death.

As dark secrets from the past begin to resurface into the present, both Milner (Geraldine James) and the gang are faced with the explosive revelation that Janus is something far more dark and terrifying than they could ever have imagined. As the Network's destructive plans are finally set into motion, the gang now face a race against time to prevent global disaster.

The second series of the Channel 4 conspiracy thriller Utopia is released on DVD on 18th August 2014 courtesy of Channel 4 DVD. A series 1 and 2 boxset is also released on the same day.