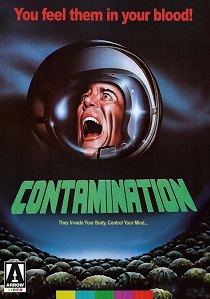 Branded as a video nasty in the UK, director Luigi Cozzi's Contamination, restored and released on dual-format DVD and Blu-ray by Arrow Films on 6th July 2015, takes the premise of Ridley Scott's classic Alien and peppers it with exploding guts galore and a dangerously infectious soundtrack from celebrated Italian prog-rockers Goblin (Deep Red, Suspiria).

A cargo ship drifts up the Hudson River. Its crew: all dead, their bodies horribly mutilated, turned inside out by an unknown force. Its freight: boxes upon boxes of glowing, pulsating green eggs. It soon becomes clear that these eggs are not of this planet, and someone intends to cultivate them here on Earth. But who? And to what end?

Starring Italian horror veteran Ian McCulloch (Zombie Flesh Eaters), Contamination is an ultra-violent sci-fi epic that really gets under the skin. In space, no one can hear you scream but on Earth, the terror rings loud and clear!

DVD
When the world is locked down, they'll find their ticket out in Locked Down, released on DVD 7th June 2021 from Warner Home Video. END_OF_DOCUMENT_TOKEN_TO_BE_REPLACED
Top PicksView