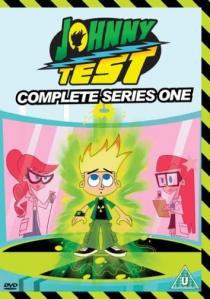 Imagine having a lollipop that gives you the strength of a hundred men, or a rocket-powered backpack that can send you to the Moon! Catch 13 super cool episodes from the No.2 rated show on Cartoon Network as Liberation Entertainment release the Complete Series One of Johnny Test on 2 Disc DVD on 6th August 2007.

Johnny Test chronicles the adventures of an intrepid 11 year old boy, his genetically engineered super dog Dukey and his 13 year old super genius scientist twin sisters, Susan and Mary, who use Johnny as their guinea pig for their out-of-this-world scientific experiments.

When it comes to adventures, Johnny and Dukey are a team obsessed with pushing the limits - speed limits, time limits, physical limits, you name it! Johnny is the ultimate test pilot where no mission is too insane, no challenge is too great, no villain is too menacing - and no sister created concoction is too wild. As long as his dog Dukey can come along, Johnny gives it a go!

The Johnny Test animation series debuted on Cartoon Network UK on 14th January 2006, and this season will stretch into 270 minutes in total; showcasing 26 x half-hour episodes. Johnny Test currently airs on a Saturday morning at 9.30am and is presently the number two rated show on Cartoon Network next to Spongebob Squarepants. Its huge fan-base is built upon unique animation style and storylines.

HotDVDBD3D-BDUHD
The grave course of events set in motion by Thanos that wiped out half the universe and fractured the Avengers ranks compels the remaining Avengers to take one final stand in Marvel Studios', Avengers: Endgame, released on DVD, Blu-ray, 3D Blu-ray and 4K-UHD 2nd September ... END_OF_DOCUMENT_TOKEN_TO_BE_REPLACED
Top PicksView