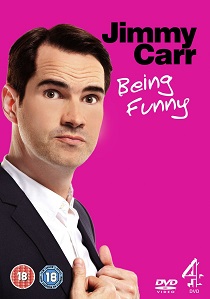 NewsStandup Comedy
News Article Go back to homepage
Having performed live to over 1.2m people, the UK's hardest working comedian Jimmy Carr, is back with his brand new stand-up DVD Jimmy Carr - Being Funny which is out to own on DVD on 21st November 2011 from 4DVD.
Jimmy Carr
Paul Wheeler
Sam Pinnell, Iain Morris, Jimmy Carr, Damon Beesley
4DVD
Unknown
21/11/2011
Thank you for supporting DVD365.net when you order using the link(s) below. As an Amazon Associate we earn from qualifying purchases
Buy DVD
Information

Having performed live to over 1.2m people, the UK's hardest working comedian Jimmy Carr, is back with his brand new stand-up DVD Jimmy Carr - Being Funny which is out to own on DVD on 21st November 2011 from 4DVD.

Packed with over 100 minutes of brand new material, including too-rude-for-TV jokes, hilarious heckling and even better put-downs, Jimmy pushes the boundaries of comedy to deliver a no-holds-barred, spectacular show. Recorded at Birmingham's Symphony Hall, Being Funny is Jimmy's next live stand-up DVD and offers the mesmerising tour-de-force of joke-telling that we have come to expect from the master of brutally succinct delivery!

The star of hit TV shows 8 Out of 10 Cats and 10 O'clock Live, Jimmy is well known for his dead pan delivery of slick one liners and non-stop gags, but his acerbic wit and fast-paced comedy style are at their brilliant best when he has the stage to himself. Having sold well over 1 million live DVDs to date, Jimmy's latest offering also features never-before-seen extras from The Nasty Show and Just for Laughs performance which sees Jimmy's unforgiving dark humour released onto the audience in full force!

Over the past 10 years, Jimmy has deservedly earned his place amongst the premier league of British comics. His stand-up achievements to date include a British Comedy Award for Best Live Stand up Tour, a Loaded LAFTA Award for Best Stand Up, a Perrier Award nomination, Best Stand-up at the Time Out Awards and Best on Screen Newcomer from the Royal Television Society.

Jimmy's latest release, Being Funny is a chance to catch this award-winning comedian at his sharpest near-the-knuckle best:

UHD
A stellar cast sizzles in Heat, a taut psychological drama about an obsessive detective and a brilliant thief whose fates are linked in the aftermath of a high-stakes securities heist, released on 4K UHD 8th August 2022 from ... END_OF_DOCUMENT_TOKEN_TO_BE_REPLACED
Top PicksView