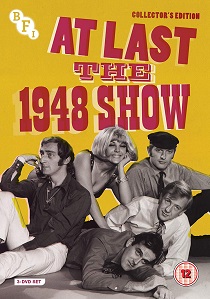 This ground-breaking, splendidly silly and surreal comedy sketch series, written and performed by John Cleese, Graham Chapman, Tim Brooke-Taylor and Marty Feldman, also starring the lovely Aimi MacDonald, was a major milestone on the road to Monty Python's Flying Circus, The Goodies and everything that came after.

This lovingly curated new deluxe three-disc set restores all the existing episodes from both series of the programme in the correct order, and is as complete as is currently possible. It includes all ten surviving episodes, two almost completely reconstructed episodes, and the complete audio of a further episode with fragments of film restored; all drawn from the vaults of the BFI National Archive, and proudly presented alongside an array of newly-filmed and archive extras.

At Last The 1948 Show is released on DVD 16th September 2019 from Spirit Entertainment.

DVD
In Your Honor, released on DVD 31st May 2021 from Paramount Home Entertainment, Bryan Cranston stars as a New Orleans judge who is forced to confront his own deepest convictions when his son is ... END_OF_DOCUMENT_TOKEN_TO_BE_REPLACED
Top PicksView