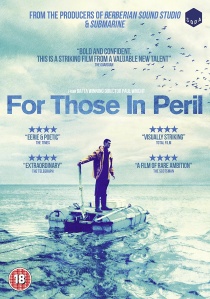 For Those In Peril, released on DVD by Soda Pictures on 3rd March 2014, tells the story of Aaron, a young misft in a remote Scottish community, who is the lone survivor of a strange fshing accident that claimed the lives of five men, including his older brother. Spurred on by sea-going folklore and local superstition, the village blames him for this tragedy, making him an outcast amongst his own people. Steadfastly refusing to believe his brother is dead and possessed by grief, madness and magic, Aaron sets out to recover him.

For Those In Peril is the tenth and final film on the Warp X slate, produced by Mary Burke (Berberian Sound Studio, Submarine) and Polly Stokes (The Organ Grinder's Monkey) and is also the debut feature film for director Paul Wright.

Paul Wright studied Film at the RSAMD in Glasgow, where he made his first short film Hikikomori, which won the Scottish BAFTA for Best New Work followed by a BAFTA nomination in 2007 for Best Short Film and won Best Drama Award at the Royal Television Society awards (2007). In 2008 he made Believe, which won the Golden Leopard for Best International Short Film at Locarno (2009), as well as major awards at Winterthur and Leeds International Film Festival. His next short, Photos Of God, was selected for the 2010 Berlin Film Festival. Paul's graduation flm, Until The River Runs Red, won the BAFTA for Best Short Fiction Film in 2011. For Those In Peril is his debut feature.