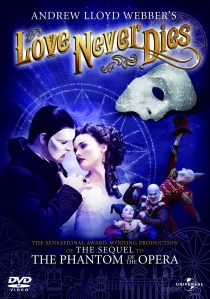 From musical theatre's most captivating composer, based on the book by Ben Elton and featuring the new highly acclaimed Australian production filmed in Melbourne, Andrew Lloyd Webber's Love Never Dies on Blu-ray and DVD showcases a spectacular show that is the perfect gift for Mother's Day. The production was described by Andrew Lloyd Webber as "one of the finest productions I've ever seen of my work, anywhere".

Be transported to New York's playground Coney Island where the masked phantom has been hiding amongst the freaks and side shows for 10 long years, yearning for his one true love and musical protégée, Christine Daaé. Lured by the bright lights and financial rewards of Coney, Christine and her family flee Manhattan to perform on stage for one last time, but Christine soon discovers the true identity of her mysterious impresario and that all is not what it seems.

Andrew Lloyd's Webber'sLove Never Dies features a 21 strong piece orchestra and an impressive cast of 36 including highly praised musical actors Ben Lewis as the Phantom and Anna O'Byrne as his Christine. Ben Lewis has a long history on the Australian stage and has starred in a number of successful stage musicals including the smash hit Priscilla Queen of the Desert and Monty Python's Spamalot.   Anna O'Byrne's big break came when she was cast in the Australian production of The Phantom of the Opera, where she covered and performed the role of Christine Daaé opposite Anthony Warlow's Phantom. She is also an experienced performer in many operatic productions.

A dazzling production that takes audiences on a thrilling rollercoaster ride of intrigue, obsession and romance, don't miss the magnificent Love Never Dies on Blu-ray and DVD out on 12th March 2012 - an ideal gift for Mother's Day.

The year is 1907. It is 10 years after his disappearance from the Paris Opera House and the Phantom has escaped to a new life in New York where he lives amongst the screaming joy rides and freak-shows of Coney Island. In this new electrically-charged world, he has finally found a place for his music to soar. All that is missing is his love - Christine Daaé.

Now one of the world's finest sopranos, Christine is struggling in an ailing marriage to Raoul. So, it is with excitement she accepts an invitation to travel to New York and perform at a renowned opera house. In a final bid to win back her love, the Phantom lures Christine, her husband and their young son Gustave from Manhattan; to the glittering and glorious world of Coney Island... not knowing what is in store for them...

UHD
With all the heart and humour audiences expect from Walt Disney Animation Studios, Big Hero 6, released on 4K UHD for the first time 30th August 2021 and exclusive to Zavvi, introduces you to a ... END_OF_DOCUMENT_TOKEN_TO_BE_REPLACED
Top PicksView