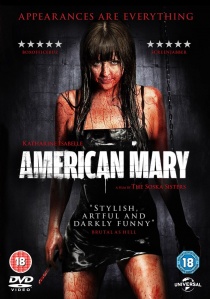 Released on DVD and Blu-Ray on 21st January 2013 by Universal Pictures UK, the Soska Sisters (aka The Twisted Twins), co-creators of the award winning, cult indie smash hit Dead Hooker In A Trunk make an awe-inspiring return with their second feature American Mary, a stylish, sexy, disturbing and darkly comic "body-mod" horror-thriller that many critics are hailing as the best and most genuinely original horror movie of the year.

Co-written and co-directed by Jen and Sylvia Soska (Dead Hooker In A Trunk) and featuring an outstanding, career-best lead performance by Katharine Isabelle (Being Human; Freddie vs. Jason; Ginger Snaps) in the title role, American Mary has been wowing audiences at international film festivals (including London's Film4 Frightfest) throughout 2012 and has already garnered Five Star reviews from Horror-Movies.ca and BoxOfficeBuz.com and Four Star reviews from Fangoria and Dread Central.

Struggling to make financial ends meet while studying to be a surgeon, talented medical student Mary Mason (Katharine Isabelle) finds herself reduced to applying for work at a local strip joint in order to pay off her mounting debts. During her interview, she is unexpectedly called upon to perform some illegal emergency surgery on one of the club's clients and is instantly rewarded with a significant cash payment.

Word of Mary's scalpel-work soon reaches one of the club's dancers, Beatress Johnson (Tristan Risk), who approaches her offering to pay handsomely for some off-the-books, extreme body-modification work on a friend. The ensuing surgery is a huge success and Mary's skills soon attract the attention of an underground network of high-paying clientele, all looking for someone to administer procedures and body-mod work unavailable through the usual legal channels.

However, the allure of the easy money and the increasingly bizarre work she is commissioned to perform begins to leave a mark on Mary and when an incident involving the established surgeons she once idolized leaves her traumatised, "Bloody Mary", as she has come to be known, responds in the only way she knows how.