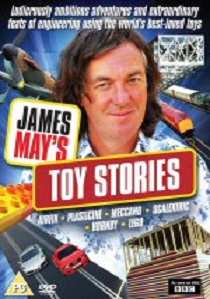 NewsAdventure
News Article Go back to homepage
Best-known for his role on Top Gear as one of the three musketeers, James May embarks on a new mission of fun with the release of James May's Toy Stories, available to own on 7th December 2009, courtesy of 4DVD.
James May
Graham Strong, Alexander Dunlop, Paul Buller, Tom Whitter
Ian Holt, Rebecca Magill, Will Daws, Stuart Cabb
4DVD
Unknown
07/12/2009
As an Amazon Associate we earn from qualifying purchases
Buy DVD
Information

Best-known for his role on Top Gear as one of the three musketeers, James May embarks on a new mission of fun with the release of James May's Toy Stories, available to own on 7th December 2009, courtesy of 4DVD.

Never one to turn down a challenge, James takes on some madcap toy adventures in a bid to get children out of their bedrooms and away from their playstations and parents re-embracing the child within.

In six toy-tastic episodes that feature extraordinary feats of engineering, James takes time out with some of Britain's best loved toys - putting generations of families at the heart of some ludicrously ambitions undertakings and reminding us all of the precious joys of creativity and quality family entertainment.

"For too long now we have regarded the great toys as mere playthings" said James. "It's time to use them to bring people together and achieve greatness. And I bet it'll be a right laugh as well."

Taking on the biggest toy challenges of all time, James attempts to build the world's first full-size house made of Lego, the world's first Plasticine garden, the world's biggest ever model plane, the world's greatest model train set, a world record beating Scalextric track, and a life-size bridge made out of Meccano; did you expect anything less from our renowned caravan stunt man?

Brick by brick - that's 3.4 million bricks to be precise- we see James and 1200 volunteers work around the clock to build a magical two storey residence using the full array of Lego colours. Petal by petal, we witness the creation of Chelsea flower show's first ever non-organic exhibit in its 150 years of history- that's 1365kgs of Plasticine and 24 different colours.

Track by track, we can watch James build the world's greatest model train by laying 16km of toy track along the old Barnstaple to Bideford seaside route in Devon. From paint to glue to sanding, we watch in awe as the master of fun creates a full size model Spitfire spanning 11m, 8.8m long and 3.3m tall. And finally, just in case these remarkable challenges haven't got you racing to get down to the store, prepare for two hours of sheer genius as James and 350 volunteers build a world beating Scalextric track on what was the world's first racetrack, and a life-size bridge made entirely out of Meccano - a world first!

The DVD also includes outstanding deleted scenes and an exclusive interview with the charismatic James May, who reminds us all of the importance of family and imagination with this brilliant exploration of toys, putting batteries right back into the drawer.

UHD
Fast forward to the 1980s as Wonder Woman's next big screen adventure finds her facing a wide array of foes including Max Lord and The Cheetah as Wonder Woman 1984 flies in on Blu-ray and 4K UHD 22nd ... END_OF_DOCUMENT_TOKEN_TO_BE_REPLACED
Top PicksView