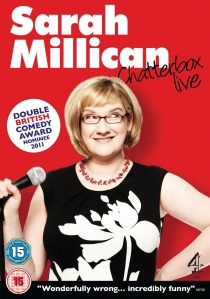 In the year that saw her nominated for two British Comedy Awards, complete a nation-wide sell out tour and become a regular face on the UK's top comedy television shows, Sarah Millican has ascended to become one of the nation's best loved comedians.

Released for the first time on DVD, Chatterbox Live is a chance to experience Sarah's sell out Chatterbox show in your living room. Ruder than on the telly, the DVD showcases Sarah's unassumingly hilarious views on modern life, positioning her as a comedian at the very top of her game.

A familiar face on popular TV shows like The Graham Norton Show, Michael McIntyre's Comedy Roadshow, Have I Got News For You, 8 Out of 10 Cats and Live at the Apollo, Sarah has garnered rave reviews from critics and fans alike. With a new Edinburgh show, her self-penned series Sarah Millican's Support Group for Radio 4 and an appearance at The Royal Variety Performance, Sarah is without doubt one of the most exciting comics in the country, attracting fans of all ages with her down-to-earth and sometimes blunt delivery.

Recorded earlier this year, Chatterbox Live invites you to enter the wonderful world of Sarah Millican - where living alone drives your parents to put you on suicide watch; where a cup of tea in the bath is the epitome of luxury and where free family planning clinic condoms make perfect stocking fillers.

Touching on life, love and what to do when your boyfriend puts a sock on your boob during sex, Chatterbox Live shows the lovable Geordie effortlessly sewing a humorous thread through life's more bizarre moments to hilarious effect.

HotDVDBD
From the producers of Nobody and John Wick comes a bare-knuckle, coal-dark holiday action-comedy that says you should always bet on red as Violent Night sledges in on DVD and Blu-ray 6th March 2023 from Warner Home Video. END_OF_DOCUMENT_TOKEN_TO_BE_REPLACED
Top PicksView