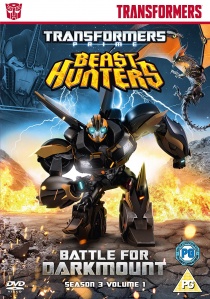 This explosive season begins immediately following the shocking cliffhanger of the monstrous war on earth between the Autobots and Decepticons. An heroic Optimus Prime sacrificed his own safety to ensure the escape of his army, but the Autobot base has been thrown into ruin, with its inhabitants forced into hiding as the Decepticons begin to take control of their new fortress; Darkmount.

However, following years of isolation on Cybertron, Shockwave arrives on earth in an attempt to hunt down the remaining Autobots who have been scattered across the globe and establish an overarching Deception dominion. Now the only chance of survival is for the Autobots and humans to work together to defeat a common foe, protect their homelands and overthrow Megatron's tyrannous regime once and for all.

While their future hangs in the balance, our protectors have yet to determine if their fearless leader Optimus Prime managed to survive the blast!

Don't miss out on this game-changing season opener, as Transformers Prime: Beasthunters - The Battle for Darkmount makes its action-packed debut on DVD on 27th April 2015, courtesy of Primal Screen.