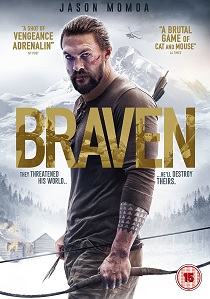 Jason Momoa (Aquaman, Justice League, Conan the Barbarian) stars in the slick action-thriller, Braven, arriving on Blu-ray and DVD 30th April 2018 from 101 Films. The edge-of-your-seat action film tells the tale of Joe Braven (Momoa) and his father on a remote hunting trip that very quickly goes wrong, forcing them to defend their home and family at all costs.

Also starring Garret Dillahunt (TV's The Gifted and Deadwood, No Country for Old Men) and Stephen Lang (Avatar, Don't Breathe, Conan the Barbarian), the Braven Blu-ray and DVD include a never-before-seen featurette.

When Joe (Jason Momoa) and his father (Stephen Lang) arrive at their remote hunting cabin, they're hoping for a quiet weekend. What they find is a stash of heroin, hidden in the cabin by drug traffickers. When the criminals suddenly descend upon the cabin, Joe and his father must make a kill-or-be-killed stand for survival.