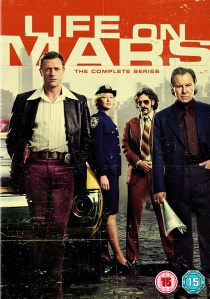 The US version of this hugely popular science-fiction crime drama swaps Manchester for New York in a sexy, swaggering take on the UK smash-hit series. Life On Mars: The Complete Series is available to own on DVD from 15th February 2010 from Twentieth Century Fox Home Entertainment.

When NYPD detective Sam Tyler is hit by a car in 2008, he wakes up in 1973, in the cultural hotbed of New York City. In the tumultuous times of the Vietnam War, Watergate, women's lib and the civil and gay rights movements, and without a cell phone, computer, PDA or MP3 player, this is a totally different world! Is Sam mad, in a coma or has he really gone back in time? He tries desperately to understand what has happened to him and how he might return 'home'.

Life On Mars invites you to immerse yourself in the nostalgia of all things 1970's, and features superb music from the likes of David Bowie, Elton John and The Who. With a markedly different conclusion to its UK series counterpart, Life On Mars: The Complete Series is available to own on DVD from 15th February 2010.

HotUHD
Now more stunning than ever before, return to the stunning locations and epic adventures in Peter Jackson's Middle-earth in The Lord of the Rings Trilogy, arriving on stunning 4K UHD 30th November 2020 from Warner Home Video. END_OF_DOCUMENT_TOKEN_TO_BE_REPLACED
Top PicksView