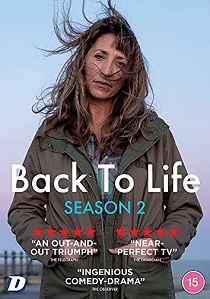 NewsTV SeriesComedy
News Article Go back to homepage
Released from a decade in prison following a terrible crime, continuing to be hounded by her past, Miri Matteson returns for a second series of Back to Life, released on DVD 25th October 2021 from Dazzler Media.
Daisy Haggard, Adeel Akhtar, Geraldine James, Richard Durden, Jamie Michie
Ella Jones
Catherine Gosling Fuller
Dazzler Media
3 hours 0 minutes
25/10/2021
#BackToLife Series 2
Thank you for supporting DVD365.net when you order using the link(s) below. As an Amazon Associate we earn from qualifying purchases
Buy DVD
Buy DIGITAL
Information

It's three weeks after the friendship-shattering revelations of Series 1, and Miri Matteson has retained her determination to live her life after coming out of prison and returning to her childhood home in Hythe.

She's got a trial shift at the supermarket; she and her neighbour Billy are going for a not-date-date and a flat of her own is in her sights. But not only must Miri cope with the fact that her mother, Caroline, and ex-boyfriend, DOM, were until recently having an affair, she has to try and avoid Mandy, her ex-best friend.

Miri is finding it hard to forgive Mandy for hiding the truth behind the events that led to Lara's death, and put Miri behind bars for 18 years. And Miri's desire to put the past firmly in her rear-view mirror is about to be seriously challenged by the return of Lara's father, Mr Boback. Meanwhile, Caroline and Oscar realise that forgiveness is easier said than done, and that Miri could be the main thing they have in common.

Series 2, released on DVD 25th October 2021 from Dazzler Media, sees Miri continue to be hounded by her past but maintain her optimism about her future in the face of awkward encounters, challenging life admin and a man intent on revenge.