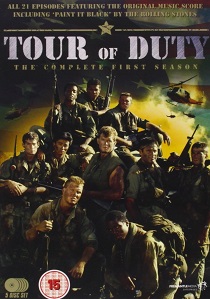 The first television series to dramatise the events of the Vietnamese War, Tour Of Duty, released on DVD by Fabulous Films on 21st November 2011, was a groundbreaking show that combined breathtaking action with thought-provoking drama while addressing the human elements of the conflict, from issues of racism and culture to suicide, drug abuse, the civilian casualties and the alienation of those soldiers who made it home alive.

Now, Tour Of Duty comes to UK DVD in its original broadcast format, for the first time ever in any worldwide territory, including the full original soundtrack of classic music tracks - including the main title track, The Rolling Stones' Paint It Black - that importantly set the tone and mood of the series and helped make it so popular with viewers.

Tour Of Duty - The Complete First Season features all 21 one-hour episodes of the show's debut series collected over five discs.

The plotline revolves around a single platoon of young US soldiers during their one-year tour of combat duty in Vietnam during the late 1960s. Miles from home in the unfamiliar and hostile terrain of South-East Asia, this small band of infantrymen from diverse racial, cultural and philosophical backgrounds are ultimately forced to depend upon each other as brothers in arms fighting in a war that was to last almost 20 years.

HotUHD
A decade-defining classic from the imagination of Steven Spielberg and Chris Columbus, celebrating its 35 year anniversary, The Goonies is released on 4K UHD 31st August 2020 from Warner Home Video. END_OF_DOCUMENT_TOKEN_TO_BE_REPLACED
Top PicksView