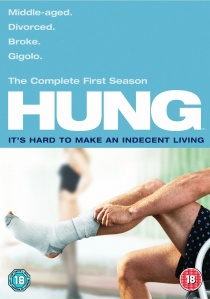 They say it's hard to make an indecent living. Get your hands on HBO's steamiest new comedy drama as Hung - The Complete First Season launches on DVD, Blu-ray and digital download on 13th September 2010 from HBO Home Entertainment packed with special features.

Recently shown in the UK on both More4 and Channel 4, this exceptionally and thoughtfully created new series with integrity is smart, edgy and critically acclaimed and shows HBO at the forefront of the social agenda. Innovative and coined as recession programming, the series looks at the lengths we will go to in an economic downturn to keep our heads above water, in both a sensitive and entertaining way that matches the current mood of the world's population.

Meet Ray Drecker; middle-aged, divorced, broke, gigolo. Ray (Thomas Jane - Boogie Nights, Stander, The Punisher) is a well-endowed, but unhappy Detroit high school teacher who finds himself homeless after his house burns down and desperately strapped for cash. After attending a motivational seminar, the ex-sports legend decides it is time to take matters into his own hands and utilise his outstanding talent to turn his life around.

At the advice of conquest and self-appointed business partner, Tanya Skagle (Jane Adams - Frasier, Eternal Sunshine of the Spotless Mind), the unlikely pair set up as 'Happiness Consultants', an entrepreneurial venture with one BIG difference. With a small amount of coaching, Ray begins to moonlight as a male escort in a last-ditch attempt to change his fortunes. Tanya becomes his unconventional and straight-talking pimp, who is able to put a female spin on what Ray's clients really want.

However, with two teenage children and his ex-wife Jessica, played by Anne Heche (Nip/Tuck, Ally McBeal), will Ray's job as a gigolo cause more trouble than it's worth? Watch as Ray struggles to keep on top of his clients while trying to hold down his normal life.

Continuing to work with some of the greatest storytellers in the world, Hung boasts the directing talents of HBO regulars Daniel Attias (Treme, Big Love, The Wire, Entourage) and David Petrarca (True Blood, Dirty Sexy Money, Eli Stone) as well as Bronwen Hughes (White Collar, Burn Notice, The L Word) and Academy Award® winning writer and Alexander Payne, (Sideways, About Schmidt), the acclaimed cast and crew has been hailed on both sides of the pond earning two Golden Globe® nominations for Jane and Adams.

DVD
After more than thirty years of service as one of the Navy's top aviators, Pete 'Maverick' Mitchell is back where he belongs as Top Gun: Maverick flies onto DVD, Blu-ray and 4K UHD 31st October 2022 from Paramount Home ... END_OF_DOCUMENT_TOKEN_TO_BE_REPLACED
Top PicksView