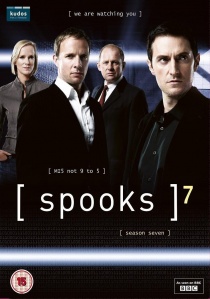 The world is still facing the threat of Islamic terrorism and with Russia also emerging as a new super power; the MI5 team face even more frightening and deadly challenges in this latest series. Six months on after being held captive by mercenaries, agent Adam Carter (Penry-Jones) is spearheading a team against a major terrorist threat as Al Qaeda kidnap a British soldier.

When the kidnappers threaten to kill the soldier if Remembrance Sunday ceremonies take place, the team are under pressure to eliminate the danger by any means possible. As a car bomb is suspected in the vicinity of a ceremony marking the day, the heart-pounding pressure is on to detect, destroy and save thousands of lives in a race for survival.

Elsewhere Harry Pearce (Firth) finds himself a new Spook when embroiled in a secret assassination with the Russian intelligence services, the FSB. The new recruit is Harry's old protégé Lucas North (Armitage) who has been released from a Russian prison where he has been languishing for the past eight-years, but his appointment asks more questions than answers - can he come back and whose side is he on?

Prodigal daughter and long-standing MI5 agent Ros Meyers (Norris) also returns from a terrifying mission in Russia as the FSB close in on her investigation into a powerful Russian oil tycoon connected to their intelligence service.

The four-disc boxset comes packed with 8 hours of drama and extras including a 'making of' documentary, Spooks in Russia and an action sequence featurette. Now you can get closer to the action than ever before. Explosive, topical and relevant drama from Kudos (Ashes to Ashes¸ Life on Mars, Hustle), Spooks 7 is essential viewing and a must own for fans of the compelling espionage drama.