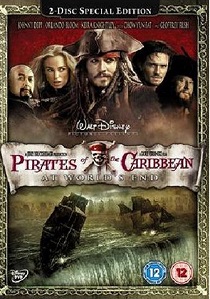 After grossing a colossal $1bn worldwide and over £40 million in the UK alone, the epic third instalment in the world's most famous movie franchise - Pirates of the Caribbean: At World's End, from Walt Disney Pictures - launches on Disney DVD and Blu-ray Disc from 19th November 2007.

The third chapter in the Pirates story trades the sunny skies of the Caribbean for the world's darkest, wildest waters as Captain Jack Sparrow and the rest of the Black Pearl's crew return for more swashbuckling thrills and spills on the Seven Seas.

Navigating through treachery and betrayal, Will (Orlando Bloom) and Elizabeth (Keira Knightley) journey to the very ends of the Earth to save the Pirates' freedom loving way of life. After freeing Jack Sparrow (Johnny Depp) from his mind-bending trap in Davy Jones' locker, our heroes forge their way to the Far East in a desperate quest to unite the nine Pirate Lords of the Brethren Court and stop Davy from wreaking havoc on the world's waters.

Titanic battles, colossal clashes and awe-inspiring special effects make this the most visually spectacular Pirates movie yet. Breathtaking visual extravaganzas such as the mesmerising Maelstrom - a wild, raging whirlpool that whips the high seas into a crazed frenzy - are so impressive that they won't fail to leave hearts beating and palms sweating in thrilling suspense.

Available as both a Double Disc Special Edition DVD and a four-disc Pirates triple pack featuring all three movies, Pirates of the Caribbean: At World's End comes packed with a booty of bonus features including a show and tell on how the film's stunning special effects were created in Anatomy of a Scene: The Maelstrom. Further features such as A Producer's Diary delve deep into the making of the movie and The Tale of the Many Jacks and Keith and the Captain take viewers closer to the stars. These and many more such as bloopers will keep fans entertained long after the action is over.

Extra features on Blu-ray - which offers clearer, sharper images and a bigger storage capacity than the traditional DVD format - include Enter the Maelstrom - an immersive interactive tour of the hangar that housed the sets used in this thrilling action sequence. Fans will be able to navigate through pop-ups and selectable icons to reveal multi-media content about how the scene was created.

Produced by legendary Hollywood heavyweight Jerry Bruckheimer and directed by Gore Verbinski, this thrilling tour de force of action-adventure isn't to be missed when it launches on DVD and Blu-ray this November.

In the follow-up to Walt Disney Pictures' 2006 record-breaking smash hit Pirates of the Caribbean: Dead Man's Chest, we find our heroes Will Turner (Orlando Bloom), Elizabeth Swann (Keira Knightley) allied with Captain Barbossa (Geoffrey Rush) in a desperate quest to free Captain Jack Sparrow (Johnny Depp) from his mind-bending trap in Davy Jones' Locker while the terrifying ghost ship, the Flying Dutchman and Davy Jones, under the control of the East India Trading Company, wreaks havoc across The Seven Seas.

Navigating through treachery, betrayal and wild waters, they must forge their way to exotic Singapore and confront the cunning Chinese pirate Sao Feng (Chow Yun-Fat). Now headed beyond the very ends of the earth, each must ultimately choose a side in a final, titanic battle as not only their lives and fortunes, but the entire future of the freedom-loving Pirate Way, hangs in the balance.