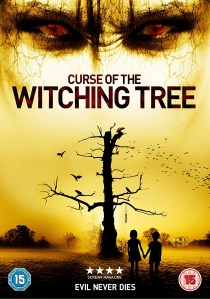 The Church accuses an innocent woman of killing her own son, hang her for being a witch and steal her farm. She curses the tree so that every male child that touches the tree will contract The Plague. Over the years nine boys die of the plague and the church conceal their deaths and bury them in the farm's barn. The boy's souls haunt the woods around the tree and the farm.

When Amber Thorson (Sarah Rose Denton) moves her two children Jake (Lawrence Weller) and Emma (Lucy Clarvis) into the old farmhouse after her husband is left comatose following an accident they begin to witness strange phenomena and younger sibling Jake learns that his new dwelling was once owned by a persecuted witch. But are the local ghost stories true?

James Crow writes, directs and produces his debut horror feature Curse of the Witching Tree, released on DVD on 18th May 2015 courtesy of 4Digital Media.

DVD
For the first time in the cinematic history of Spider-Man, our friendly neighborhood hero's identity is revealed in Spider-Man: No Way Home, released on DVD, Blu-ray and 4K UHD 4th April 2022 from Sony Pictures Home ... END_OF_DOCUMENT_TOKEN_TO_BE_REPLACED
Top PicksView