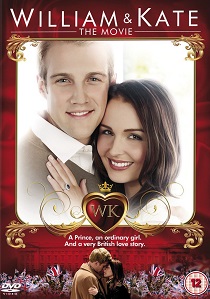 The Hollywood fe ature film that has sparked worldwide media frenzy over the last few months has finally arrived. The story of Will & Kate's fairy-tale romance is captured on DVD for the very first time on 25th April 2011, courtesy of Revolver Entertainment.

Shot entirely in Los Angeles and inspired by true events, viewers are cordially invited to relive the highs and lows of the couple's nine-year courtship: as they attempt to maintain a normal relationship despite family pressures and intense media attention. The story concludes with the ultimate ending, a picture-perfect Royal Wedding.

The movie features some of the most iconic highlights of the couple's relationship - from the moment when the future king gallantly forked out £200 to watch Kate model in a charity catwalk show, to the first time his future bride met the Royal family, and the utterly romantic day he proposed to Kate in his beloved Africa. Every major milestone in the couple's enchanting romance is celebrated in this truly historic 'made for TV' love story.

British actress Camilla Luddington stars as Miss Middleton, with New Zealand-born actor Nico Evers-Swindell as her Royal beau, Prince William. Camilla, who like her on-screen persona was also brought up in leafy Berkshire, has previously had roles in the hit American shows Days Of Our Lives and C.S.I, whilst Nico's credentials include Law & Order and Edge Of Darkness.

Describing her role in the most talked about Royal movie of our time; Camilla Luddington said: "Viewers are going to get a great love story. If you're a romantic at heart you're going to love it."

Celebrate and commemorate the Royal event of the year with William & Kate: The Movie.

HotUHD
After moving to a new town, two brothers discover that the area is a haven for vampires as the classic The Lost Boys is released on 4K UHD 20th September 2022 from Warner Home Video. END_OF_DOCUMENT_TOKEN_TO_BE_REPLACED
Top PicksView