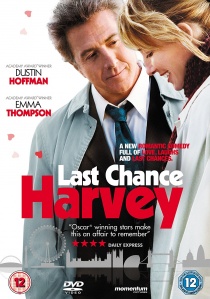 New beginnings are there to be found at any age. Academy Award winners Dustin Hoffman and Emma Thompson shine in Last Chance Harvey, a wonderful London-set romantic comedy that celebrates seizing those elusive last chances. Momentum Pictures releases the DVD and Blu-ray on 2nd November 2009.

Dustin Hoffman (Stranger Than Fiction, Meet the Fockers, Rain Man) is New Yorker Harvey Shine, for whom things are not going well. He's lost his job and his daughter has chosen her stepfather instead of him to give her away at her wedding. However, following an unexpected meeting with Kate (Emma Thompson  Stranger Than Fiction, Sense & Sensibility, Harry Potter), Harvey sees the glimmer of a last chance for real happiness.

Director Joel Hopkins (Jump Tomorrow) wrote the screenplay especially for Emma Thompson, who was instantly inspired to enrol friend and Stranger Than Fiction co-star, Dustin Hoffman. Their chemistry lights up this delightful comedy and they give acclaimed, tour-de-force performances that are infectiously romantic. Hoffman composed songs for the movie and even plays the piano himself.

Playing like a later in life Before Sunset, Last Chance Harvey was filmed in beautiful locations around London and is a heartfelt love letter to our capital city. The South Bank has never looked so good and becomes a new Paris for last chance romantics.

Last Chance Harvey is the feel good film of the year and the perfect gift for Christmas. Just when you think that longed-for opportunity for happiness is never going to be yours, along comes a story of first loves, last chances and everything in between.

New Yorker Harvey Shine (Dustin Hoffman) is on the verge of losing his dead-end job as a jingle writer. Warned by his boss (Richard Schiff - The West Wing) that he has just one more chance to deliver, Harvey goes to London for a weekend to attend his daughter's (Liane Balaban - Definitely Maybe) wedding but promises to be back on Monday morning to make an important meeting or else. Harvey arrives in London only to learn his daughter has chosen to have her stepfather (James Brolin - Catch Me If You Can) walk her down the aisle instead of him.

Doing his best to hide his devastation, he leaves the wedding before the reception in hopes of getting to the airport on time, but misses his plane anyway. When he calls his boss to explain, he is fired on the spot. Drowning his sorrows at the airport bar, Harvey strikes up a conversation with Kate (Emma Thompson), a slightly prickly, 40-something employee of the Office of National Statistics. Kate, whose life is limited to work, the occasional humiliating blind date and endless phone calls from her smothering mother (Eileen Atkins - Cranford, Gosford Park), is touched by Harvey, who finds himself energized by her intelligence and compassion. The growing connection between the pair inspires both as they unexpectedly transform one another's lives. 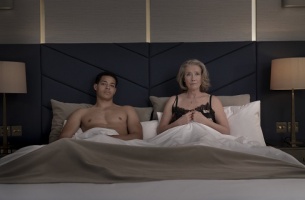