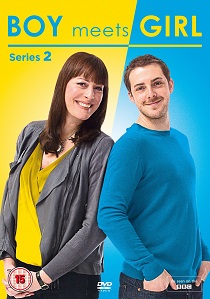 Following the success of the hilarious, first ever transgender rom-com Boy Meets Girl, it returns for a second series on DVD on 15th August 2016 courtesy of RLJ Entertainment's Acorn Label, alongside the box set release of Boy Meets Girl Series 1 and 2.

Having declared their enduring love for one another, Leo (Harry Hepple - Criminal) and Judy (Rebecca Root - The Danish Girl) are now co-habiting - albeit at Peggy's (Janine Duvitski - Benidorm) - and making plans for a future together. Their respective families are very supportive but cannot help sticking their noses in and causing chaos.

Pam (Denise Welch - Coronation Street), now the most ardent supporter of all things transgender welcomes a new young trans man, Charlie, into her house while Jackie (Lizzie Ropper - This is Jinsey), always an ardent supporter of all things male, welcomes Dean, the pest controller into her bed. Meanwhile, Tony (Nigel Betts - The Catherine Tate Show) uses his redundancy money to start his own cafe with wastrel son, James (Jonny Dixon - Grange Hill), as his assistant. And with Judy and Leo's love in the air, it's now James' turn to fall for an older woman.

HotDVDBD
An impending apocalypse raises the stakes and shatters the boundaries of time and space in Marvel's Agents of S.H.I.E.L.D. - The Complete Fifth Season, arriving on DVD and Blu-ray 1st October 2018 from Walt Disney Home Entertainment. END_OF_DOCUMENT_TOKEN_TO_BE_REPLACED
Top PicksView