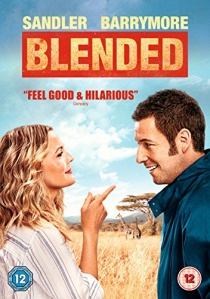 Two families will have to survive their vacation when Blended arrives on Blu-Ray and DVD on 29th September 2014, courtesy of Warner Home Video. Marking the third comedy collaboration between stars Adam Sandler and Drew Barrymore, Blended follows two single parents whose families collide on an African safari.

Blended was directed by Frank Coraci, who previously collaborated with Sandler and Barrymore on The Wedding Singer and also directed Sandler in the hit comedies The Waterboy and Click. The screenplay is by Ivan Menchell & Clare Sera. Blended was produced by Mike Karz, Adam Sandler and Jack Giarraputo, with Barry Bernardi, Josie Rosen, Tim Herlihy, Allen Covert and Steven Koren serving as executive producers.

After a disastrous blind date, single parents Lauren (Barrymore) and Jim (Sandler) agree on only one thing: they never want to see each other again. But when they each sign up separately for a fabulous family vacation with their kids, they are all stuck sharing a suite at a luxurious African safari resort for a week.

DVD
After more than thirty years of service as one of the Navy's top aviators, Pete 'Maverick' Mitchell is back where he belongs as Top Gun: Maverick flies onto DVD, Blu-ray and 4K UHD 31st October 2022 from Paramount Home ... END_OF_DOCUMENT_TOKEN_TO_BE_REPLACED
Top PicksView