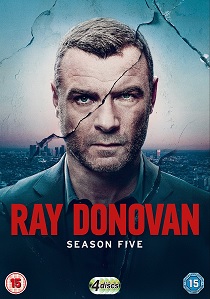 Ray Donovan (Emmy and Golden Globe Award nominee Live Schreiber) is back and he's doing what he does best - keeping the skeletons in the closets of Hollywood's rich and famous.

Ray is still the guy you want when you're in a fix. There's no problem he can't solve or secret he can't bury. But his family life is another matter as the ongoing upheaval has taken an emotional toll, leaving him more vulnerable than ever. L.A.'s preeminent fixer is heading into uncharted territory and will soon discover that some damage can't be controlled. Season Five also stars Susan Sarandon in her recurring role as legendary media mogul Samantha Winslow.

DVDTV
12/10/2021
Delve into the depths of deceit and control in a brand-new gripping psychological thriller, Angela Black, is set to receive its UK DVD debut from Acorn Media International on 15th November 2021.

From The Haunting of Hill House creator Mike Flanagan and producer Trevor Macy comes The Haunting Of Bly Manor, the next highly anticipated chapter of The Haunting anthology series, released on DVD and Blu-ray 18th October 2021 from Paramount Home Entertainment.
Movie quote