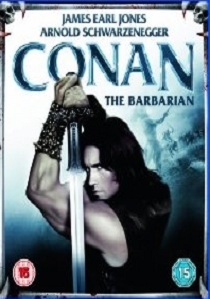 Thief. Warrior. Gladiator. King. Twentieth Century Fox Home Entertainment is proud to announce Conan The Barbarian, directed by John Milius and starring Arnold Schwarzenegger, available to own for the first time on Blu- ray from the 11th July 2011.

Arnold Schwarzenegger makes his striking screen debut as the legendary warrior hero, Conan the Barbarian. This new Blu-ray release has 2 new special featurettes entitled Art of Steel: The Blacksmith & Swordsman and Conan: From the Vault which were not available on any previous DVD release.

The film is set during the (fictional) prehistoric Hyborian Age, a time after the fall of Atlantis but eons before the rise of known ancient civilizations. As a young Cimmerian boy, Conan is instructed by his father (William Smith) on the importance of steel to their people and its relationship with their god, Crom. Soon after, a group of warriors led by Thulsa Doom (James Earl Jones) systematically destroys Conan's village.

Thulsa Doom's lieutenant, Thorgrim, whacks the villagers with his hammer, their dogs kill Conan's father and Rexor, another lieutenant of Doom's, steals the sword of Conan's father. Conan's mother is beheaded by Thulsa Doom in front of Conan with the sword Rexor stole. They sell the children into slavery after the village is rampaged. Having been forced to push The Wheel of Pain for years, a now-adult and extremely muscular Conan (Arnold Schwarzenegger) is trained as an arena fighter and then inexplicably freed by his master and begins a dangerous, full-blooded quest to avenge his parents massacre. The film's epilogue shows an aged Conan sitting upon a throne, crowned as King.

UHD
Based on the global blockbuster videogame franchise from Sega, Sonic The Hedgehog, released on DVD, Blu-ray and 4K UHD from 8th June 2020 from Paramount Home Entertainment, tells the story of the ... END_OF_DOCUMENT_TOKEN_TO_BE_REPLACED
Top PicksView