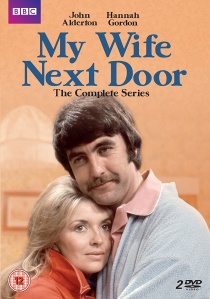 Hilarious BAFTA winning classic BBC sitcom My Wife Next Door (1972), starring John Alderton (Calendar Girls) and Hannah Gordon (Upstairs! Downstairs!), finally gets the release it deserves after being in huge demand, but unavailable as the full series since it aired in the 1970s. Now thanks to Simply Media it makes its DVD debut on 19th October 2015.

When George (Alderton) and Suzy (Gordon) finalise their divorce, they're both eager to make a fresh start and make plans to get away from it all and especially each other. But their new lives begin to look suspiciously like their old, when they both relocate to the countryside and are appalled to discover they have accidentally moved into adjoining country cottages.

Created by Brian Clemens OBE (The Avengers) and Richard Waring (Marriage Lines), this thirteen-part bittersweet comedy was inspired by the rising divorce rates after the sexual liberations of the 60s. It features star-studded guest appearances from William Franklyn (Top Secret), Dad's Army star James Beck, Mollie Sugden (Are You Being Served?), Margaret Nolan (Goldfinger) and many more, and comes to DVD as a stunning two-disc set.

Prepare for laughs galore with My Wife Next Door.

HotBD
Two of Britain's most notorious brothers The Krays were taken on by another famous pair of siblings The Kemps in Peter Medak's big screen gangster biopic set for a Limited Edition Blu-ray release from Second Sight Films on 12th July 2021. END_OF_DOCUMENT_TOKEN_TO_BE_REPLACED
Top PicksView

"It ain't what you go through; it's how you choose to grow as a person through it."