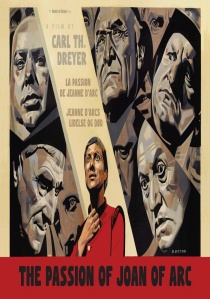 News
News Article Go back to homepage
The Masters of Cinema Series is proud to present The Passion of Joan of Arc in its worldwide Blu-ray première, in an exclusive new restoration, presented in both 20fps and 24fps playback speeds and featuring Dreyer's own original Danish-language intertitles, available on Blu-ray and DVD from 19th November 2012.
Michel Simon, Antonin Artaud, Maurice Schutz, André Berley, Eugene Silvain, Maria Falconetti
Carl Theodor Dreyer
Eureka Entertainment Ltd
1 hour 37 minutes
19/11/2012
Thank you for supporting DVD365.net when you order using the link(s) below. As an Amazon Associate we earn from qualifying purchases
Buy DVD
Buy BD
Information

The Masters of Cinema Series is proud to present The Passion of Joan of Arc in its worldwide Blu-ray première, in an exclusive new restoration, presented in both 20fps and 24fps playback speeds and featuring Dreyer's own original Danish-language intertitles, available in THREE formats - Blu-ray, DVD and Ltd Edition Dual Format (DVD & Blu-ray) SteelBook editions, released in the UK on 19th November 2012.

One of the most emotional film experiences of any era, Carl Theodor Dreyer's 1928 The Passion of Joan of Arc is a miracle of the cinema, an enigmatic and profoundly moving work that merges the worlds of the viewer and of saintly Joan herself into one shared experience of hushed delirium.

Dreyer's film charts the final days of Joan of Arc as she undergoes the degradation that accompanies her trial for charges of heresy - through her imprisonment and execution at the stake.

The portrayal of Joan by Renée Maria Falconetti is frequently heralded as the all-time finest performance in the history of film and Dreyer's unusual and virtuosic method, in seeming to render the very soul of his actress, vaulted the director decisively into the ranks of the art form's supreme geniuses