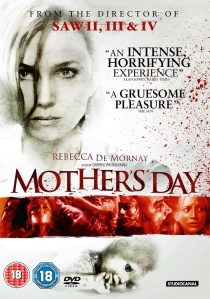 Loosely based on Charles Kaufman's 1980 Troma classic, Mother's Day, released on DVD and Blu-ray by Studio Canal on 24th October 2011, sees Rebecca De Mornay (Wedding Crashers; Lords Of Dogtown) heading a killer cast in a role that makes her psychotic character from The Hand That Rocks The Cradle look like Mother Theresa.

Following a disastrous bank robbery attempt that leaves one of their number critically wounded, three brothers head for their childhood home to take refuge until the dust settles. What they don't know is their mother (De Mornay) recently lost possession of the house in a foreclosure and no longer lives there. Instead, they stumble across the new owners, a young couple and their guests who are in the middle of birthday celebration. Seeing no alternative, the brothers take the partygoers hostage before contacting their mother to explain their dilemma

Willing to do anything to protect her offspring, mother arrives at the scene, along with her only daughter (Woll) and immediately takes control of the situation while masterminding a plan to help her family escape across the border from the US into Canada. Unfortunately for the hostages, mother's plot requires some serious funding and she's determined to get hold of it any way she can. So begins a long night of psychological terror in which loyalties are tested, secrets are revealed and sins are punished by a deeply disturbed woman with maternal instincts that can only be described as murderous.