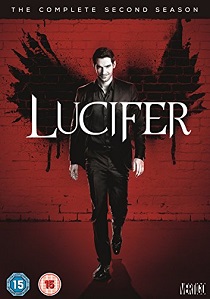 NewsTV SeriesDrama
News Article Go back to homepage
Released on DVD 21st August 2017 from Warner Home Video, sexy, dark and irreverent, Lucifer: The Complete Season 2 offers up the concept that everyone might have a chance at redemption ... even the Devil.
Tom Ellis, Lauren German, Kevin Alejandro, D.B. Woodside, Lesley-Ann Brandt
Warner Home Video
12 hours 54 minutes
21/08/2017
#Lucifer Season 2
Thank you for supporting DVD365.net when you order using the link(s) below. As an Amazon Associate we earn from qualifying purchases
Buy DVD
Information

Lucifer is the story of the original fallen angel. Bored and unhappy as the Lord of Hell, Lucifer Morningstar abandoned his throne and retired to Los Angeles, where he has teamed up with LAPD detective Chloe Decker to take down criminals.

Charming, charismatic and devilishly handsome, Lucifer has a way of manipulating people into confessing their deepest, darkest secrets, which helps Chloe deliver justice. But Lucifer quickly discovered that Chloe makes him vulnerable. When he's around her, the devil can bleed like anyone else. It's a truly scary realization that doesn't sit well with his best friend, Mazikeen aka Maze, a fierce demon in the form of a beautiful young woman. Maze wants nothing more than to leave Los Angeles and get back to her life in Hell, but Lucifer is having one helluva good time with the mortals and she is not about to leave him behind.

At the end of Season One, Chloe watched Lucifer die, only to come back to life, causing more confusion over who and what he really is. Meanwhile, her estranged husband, Dan, also an LAPD detective, comes clean about his involvement in a corrupt case - jeopardizing not only his job, but also their relationship.

In Season Two, Lucifer and his brother angel, Amenadiel, who've been sparring over Lucifer's resistance to returning to the underworld, will now be brought back together for one common goal - to find their mother, who's escaped Hell. After all, Lucifer doesn't take after his dad, so the parent he does resemble is sure to be quite terrifying.

With mom on the loose, Dr. Linda - who's become not only a therapist, but also a confidante to Lucifer, Amenadiel and Maze - will surely have a lot of advice to dole out. And, by the time she's done with them, she may need a therapist of her own.

L.A. is hotter than ever in this one-hour drama from Jerry Bruckheimer Television, based on the characters created by Neil Gaiman, Sam Kieth and Mike Dringenberg for DC Entertainment's Vertigo imprint. Released on DVD 21st August 2017 from Warner Home Video, sexy, dark and irreverent, Lucifer: The Complete Season 2 offers up the concept that everyone might have a chance at redemption ... even the Devil.

UHD
Pixar Animation Studios serves up a breakthrough comedy with something for everyone as Ratatouille arrives for the first time on 4K Ultra HD 26th July 2021, exclusive to Zavvi. END_OF_DOCUMENT_TOKEN_TO_BE_REPLACED
Top PicksView