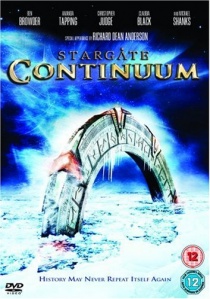 The epic quest begins when Carter, Jackson and Mitchell realise fellow team members Teal'c and Vala have vanished without a trace. Confused by their disappearance, events take a sudden turn when they are faced with the reality that history itself has changed - the Stargate no longer exists. As the rest of the team travels through time and space hunting for the Stargate, they encounter fellow Stargate troops past and present, but will they find it in time to save Vala and Teal'c and stop the evil time lords Goa'uld enslaving the world - changing history forever.

The record breaking Stargate: Continuum enters into the Guinness Book of Records this year for the most northerly filming location in history. The amazing scenes were filmed in the US Navy's Applied Physics Laboratory in the Arctic. Produced by the award winning Brad Wright and Robert C. Cooper, Stargate: Continuum on DVD is jam-packed with bonus material including a layman's guide to time travel and a look at how the Stargate team took to the Arctic.