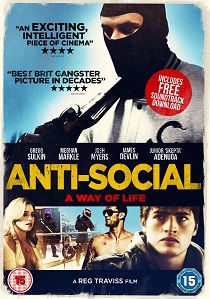 Grime stars Devlin and Skepta make their acting debuts in key roles in this slick film from Traviss, an established director with titles such as Joy Division and Screwed among his many feature film credits." Anti-Social comes to DVD on 14th September 2015.

Inspired by the spate of smash and grab robberies that hit the news between 2012 and 2013, this action-packed gangland thriller is set amidst London's sub-cultures, with Dee (Gregg Sulkin), an anarchic graffiti artist, confronting the system, and his brother Marcus (Josh Myers) a smash and grab robber, trying to make it rich with a jewellery store crime wave. For the pair being anti4social is a way of life.

As Dee finds acceptance with the city's art-scene, Marcus becomes a rising underworld face and his ambitions escalate. But when a savage gang-war erupts, Dee is forced to remember who he is, as Police and rival criminals close in on the family - and Marcus' gang defiantly prepare to take down the largest target of their careers.

The stand out soundtrack is made up of a composed-score by George Kallis (Highlander, Mandela: Long Walk To Freedom) and original music which reflect the sub-cultures with a combination of Indie-Punk and Dance, Hip-Hop and Ska.

The composed-tracks were written by various musicians who came together to work on the film, many of the tracks were written and recorded by Babyshambles's Drew Mcconnell and Adam Falkner and The King Blues's Johnny 'Itch' Fox. Other artists include, Massive Attack's Shara Nelson and rapper Rodney P. The soundtrack will be included with the DVD as a free download and includes exclusive new tracks. 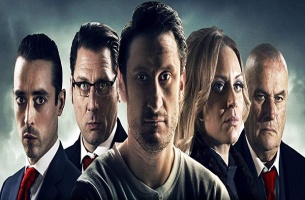