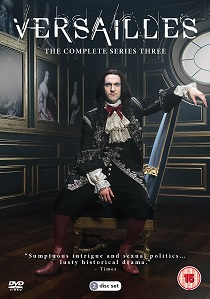 We return to the lavish court of Louis XIV for the third and final series of the captivating, sexually charged hit BBC Two drama Versailles. Series Three of this critically acclaimed series is set to arrive on DVD alongside Versailles: Complete Series 1-3 Box Set courtesy of Acorn Media International on 13th August 2018.

The third installment of Versailles finds Louis XIV (George Blagden - Vikings) in a celebratory mood. Having brought an end to the Affair of the Poisons and won the war against Holland, it seems that nothing will thwart his plans to expand his empire and assert his power over the whole of Europe. But there is trouble brewing.

At Versailles Louis is facing new challenges as his new mistress Maintenon (Catherine Walker - Acceptable Risk), leads him into an assertion of absolutism which causes considerable conflict in the Court. Louis starts to lose all tolerance for any kind of resistance, be it from his people, Protestants or the Pope himself.

And a major threat hangs over Louis... a mysterious prisoner whose face is hidden behind an iron mask.

The thrilling final series of Versailles sees the end of Louis XIV's reign on television and the beginning of the legend.

HotUHD
After moving to a new town, two brothers discover that the area is a haven for vampires as the classic The Lost Boys is released on 4K UHD 20th September 2022 from Warner Home Video. END_OF_DOCUMENT_TOKEN_TO_BE_REPLACED
Top PicksView