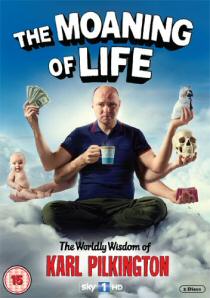 News
News Article Go back to homepage
After being sent around the world by Ricky Gervais and Stephen Merchant for An Idiot Abroad, Karl Pilkington is going it alone on a journey of self-discovery as The Moaning Of Life comes to DVD and Blu-Ray on 18th November 2013, courtesy of BBC DVD.
Jamie Sherrill, Benjamin Green, Aaron Mann, Richard Yee, John Montgomery, Karl Pilkington
Simon Smith, Benjamin Green, Richard Yee
Mel Bezalel, Carmelina Palumbo, Benjamin Green, Richard Yee
2entertain
Unknown
18/11/2013
#TheMoaningOfLife
Thank you for supporting DVD365.net when you order using the link(s) below. As an Amazon Associate we earn from qualifying purchases
Buy DVD
Buy BD
Information

After being sent around the world three times by Ricky Gervais and Stephen Merchant for An Idiot Abroad, Karl Pilkington is going it alone on a journey of self-discovery. Now Karl has turned 40 and has officially hit middle age, he's ready to re-assess his life. The Moaning Of Life comes to DVD and Blu-Ray on 18th November 2013 immediately following its run on Sky 1 HD and features exclusive extras, including deleted scenes and a filmed interview with Heat magazine's Boyd Hilton.

Karl might be known for having a moan, but the popular An Idiot Abroad star has never really worried about the big stuff. In this funny and entertaining travelogue with a difference, Karl sets out in his own inimitable style to check out other cultures and experience how they face up to life's big issues like happiness, death, careers, marriage and children.

Travelling from far flung tribes and cultures in Indonesia and Africa to bustling high-tech cities in America, Japan and South Korea, Karl encounters unusual beliefs, experiences ancient customs and traditions and discovers new and bizarre modern practices. As he works as a wedding planner in India, lives the millionaire lifestyle in South Africa, attends a party funeral in Ghana and tries nude-modelling in Japan, will Karl gain worldly wisdom or end up more puzzled than ever?

The Moaning Of Life is released on DVD and Blu-Ray on 18th November 2013 courtesy of BBC DVD and is available to pre-order now. 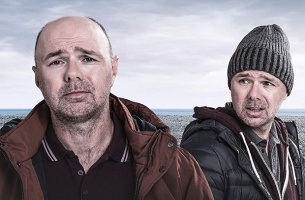 HotDVDTV
Sick Of It, released on DVD 19th November 2018 from 2Entertain, is the brand new series from Karl Pilkington, star of An Idiot Abroad and The Moaning of Life. END_OF_DOCUMENT_TOKEN_TO_BE_REPLACED
Comments
Hot Pick