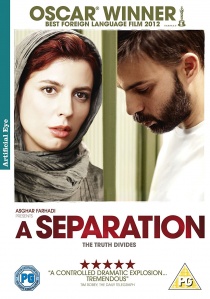 Artificial Eye will release the multi-award-winning and critically acclaimed A Separation onto Blu-ray and DVD on 21st November 2011. Both formats include insightful interviews with writer / director Asghar Farhadi and lead actress Leila Hatami. Having made an impact at the UK box office, the film has been shortlisted for Best Film (alongside Artificial Eye's Of Gods and Men) at the BBC Four World Cinema Awards to be hosted by Jonathan Ross on 15th November 2011.

Starring Leila Hatami, Peyman Moadi, Shahab Hosseini, Sareh Bayat, Sarina Farhadi, Babak Karimi, Ali-Asghar Shahbazi, Kimia Hosseini, the stand out film of the 2011 Berlin Film Festival and winner of the Golden Bear, A Separation is a suspenseful and intelligent drama detailing the fractures and tensions at the heart of Iranian society.

Written and directed by Asghar Farhadi, the film boasts a range of superb performances from the ensemble cast who collectively received the Silver Bears for both Best Actor and Best Actress at the Berlinale. The compelling narrative is driven by a taut and finely written script rooted in the particular of Iranian society but which transcends its setting to create a stunning morality play with universal resonance.

When his wife (Leila Hatami) leaves him, Nader (Peyman Moadi) hires a young woman (Sareh Bayat) to take care of his suffering father (Ali-Asghar Shahbazi). But he doesn't know his new maid is not only pregnant, but also working without her unstable husband's (Shahab Hosseini) permission. Soon, Nader finds himself entangled in a web of lies, manipulation and public confrontations. A Separation is the first ever Iranian film to be awarded the Golden Bear.

In 2001 Iranian born director Asghar Farhadi wrote the screenplay for Ebrahim Hatamikia's box-office and critical success Low Heights. His directorial debut was in 2003 with Dancing in the Dust. After Beautiful City, in 2004, and Fireworks Wednesday in 2006, Farhadi directed About Elly, winning the Silver Bear for Best Director at the 2009 Berlinale. A Separation is his fifth feature. 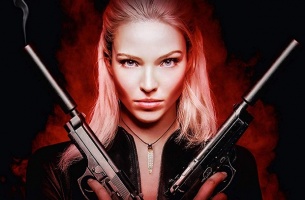