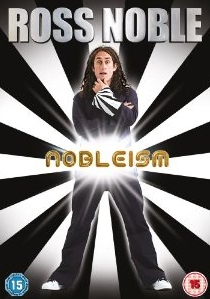 NewsRoss Noble
News Article Go back to homepage
The king of ad-lib, comedian Ross Noble reveals his unique take on the world in his eagerly-awaited DVD, Nobleism, released by Universal Pictures (UK) on 9th November 2009.
Ross Noble
Universal Pictures (UK)
2 hours 0 minutes
09/11/2009
#RossNobleNobleism
Thank you for supporting DVD365.net when you order using the link(s) below. As an Amazon Associate we earn from qualifying purchases
Buy DVD
Information

The king of ad-lib, with a list of awards too numerous to mention, comedian Ross Noble reveals his unique take on the world in his eagerly-awaited DVD, Nobleism, released by Universal Pictures (UK) on 9th November 2009, recorded at the height of his sell-out UK tour of the same name at The Liverpool Empire Theatre, when he became the first stand-up to have his show broadcast live via satellite into cinemas across the UK.

He cruises effortlessly through his idiosyncratic observations with and around his audience, pausing to ponder subjects as disparate as spongefoot man, surfing the Mersey, hair gel etiquette, adventures in helium and the hidden dangers of Kinder eggs, in a brilliantly inventive two hours of high-flying comedy. Ross Noble was voted one of the top ten greatest stand-ups of all time by Channel 4 viewers. So if you haven't experienced his hilarious, beguiling brilliance yet, here's your chance to see why.

Ross has been performing since the age of fifteen, developing from teenage larrakin into one of today's top stand-ups. Following his own path he has rarely appeared on TV, instead building a loyal following through constantly touring the globe, from big city venues to the outback of Australia.

From the finest theatres to tents in the desert, it's all one big playground. Earlier this year he completed Things, his most recent sell-out tour of the UK and is currently appearing at the Apollo Theatre, Shaftesbury Avenue. His free-wheeling biking odyssey across Australia during an 85-gig tour, Ross Noble's Australian Trip, is currently unravelling on Channel Five every Monday night.